We have looked at the proposals on the Blue House to Haddrick’s Mill route, to provide a detailed technical response. In our previous overarching response, we have already pointed out our assessment on the Northern Access Corridor schemes. The council’s justification for such destructive changes is wrong to start with and will be a huge detriment to the city, the local area and urban environment for years to come. Available here: https://newcycling.org/gross-greenwash-on-blue-house-roundabout/. Beyond these overall concerns, there are also significant issues that we feel exist at a technical level. In this response we seek to raise these.

We do not understand how the council is justifying the needs for increasing capacity through this junction. Between 2005 and 2015 the A roads on the Northern Access Corridor have seen an actual reduction in motor traffic volume.
Chart showing change in motor traffic volumes on A roads connected to the Northern Access Corridor (data taken from http://www.dft.gov.uk/traffic-counts/cp.php?la=Newcastle+upon+Tyne)

The roads that the Northern Access Corridor junctions connects show a decrease in traffic volumes and hence demonstrate spare capacity. With no change in car parking planned for the Newcastle city centre (NB we advocate a reduction in car parking), and with the significant planned housing developments being outside the A1 and A19 roads (primary road system), there is no technical reason to cater for an increase in traffic volumes along this route.

Local streets are for local people and their communities

By designing to increase traffic volumes the council will encourage driving on a route that already creates severance issues between Jesmond and Gosforth. Instead council should work on defining a road system that directs drivers to use of the primary roads that circle the city (A1 and A19). If there are capacity issues along the A1 and A19 these should be assessed by Highways England with input from Newcastle City Council, (also including LEP and NECA for transport systems going beyond Newcastle). Instead of increasing the volume of traffic across the North of Newcastle (ie through the Northern Access Corridor), the council should be looking to reduce traffic so that the roads only provide access to the immediate surrounding areas, serving local people, their neighbourhoods and communities. Council must make a step change in transport planning and clearly define the use of the roads based on their ideal function.

A number of Strategic Cycle Routes are needed to prioritise cycle movements. These enable high volumes of safe cycling to and from the connected residential areas of the city. Build it (well enough) and the users will come.

Of the proposal included in the council’s current Cycling Strategy, one route links the city centre with Gosforth and the Parklands ward and shows a corridor that crosses the Blue House junction (route 4 on the map below). The route is direct, which is good, so the provision of quality cycle infrastructure is now key to ensuring that cycling along the proposed route is safe, intuitive and convenient.

In addition to the routes included in the existing strategy, we identified gaps in the proposed network. We understand these gaps in the proposed cycle network have also been noted by council. The additional routes we propose (see route 4a for Gosforth/Benton, and 2a for Woolsington direction, below), would fill these gaps in the strategic cycle network. We raise these here https://newcycling.org/SCR/ and have included a map below. 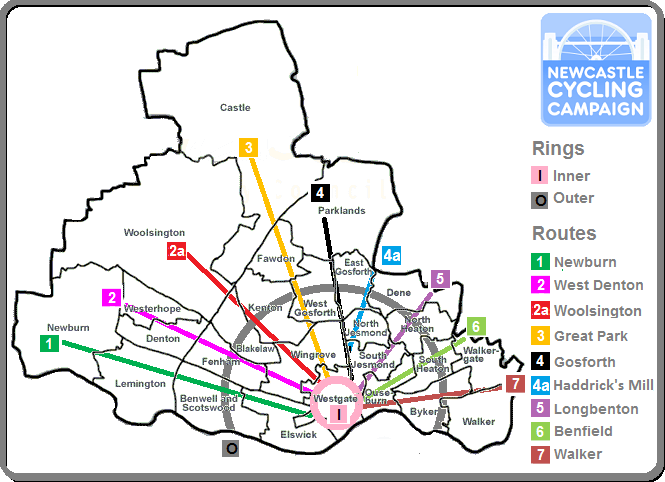 In addition to the need to for a Strategic Cycle Route through the Blue House junction, providing a more cohesive network will require high quality cycle provision at Haddrick’s Mill too, and along Jesmond Dene Road, to link up the two routes on an orbital ring. To link the radial routes, we hence have proposed orbital corridors (see Inner I and Outer O on the route plan).

Overall cycle routes 4, 4a and O are running along sections of the Northern Access Corridor. It is important that the council integrate and design for these Strategic Cycle Routes now, allocating road space at an early stage, to avoid costly retrofit solutions. Council must make clear plans for the Strategic Cycle Network and enshrine the routes in policy to ensure and protect their construction.

Due to the amount of detail we have separated the response into the three main locations (junctions). Please click on the links below to see our response for each section of the consultation:

In summary and conclusion

We object to this scheme.

It was truly unbelievable to witness that council still have not moved on from outdated engineering and planning practices. This continues to blight the city as it solely prioritises motor traffic, consigning everything else to the margins. It also runs completely counter to council’s own transport policies of community and environmental improvements, and providing alternatives such as cycling.

Politicians must now take note too. We suggest that politicians must be more vigilant next time. When plans like this motorway-style scheme ripping through the hearts of Newcastle are proposed by council officers, some probing questions have to be asked by Councillors: “How does that scheme achieve policy goals of a city with better health, cleaner air, more decent neighbourhoods and enabling Newcastle citizens to walk and cycle”. These destructive plans should never have been released to the public as these goals are not met. If we veer off these goals Newcastle will be consigned to a reduction in liveability and economic viability as it will fail to attract new businesses and people into the area and families will continue to leave the city.

Together with policy, we also must get data and evidence back at the heart of decision making again. Vehicle traffic has reduced substantially on the roads under consideration, and continues to fall. By actively facilitating modal shift by providing cycling alternatives, this reduction can be continued. Since-ever the Northern Access Corridor was mooted, politicians have failed on asking probing questions. Politicians now need to lead on putting this right.

We congratulate the council on wanting to reduce rat running in residential areas. However in the absence of road classification, a citywide movement plan, and community circulation plans, any piecemeal changes the council put forward will lack the necessary context.

It is “back to the drawing board” to put good sense into the idea of a Northern Access Corridor. We urge council to look at data and heed their own policies for reduction of car dominance and volumes, and make plans for the implementation of these policies.