This is our response to the council plans for Jesmond Dene Road / Osborne Road junction on the Northern Access Corridor. The council engagement can be accessed at https://bluehousetohaddricks.commonplace.is/schemes/proposals/jesmond-dene-road/details and comments are open until 21st August 2016.

It forms part of our detailed response.

It’s good to see council talking about tackling rat running. It’s destructive to communities and there are easy design solutions to combat this. The proposals claim to tackle rat running within the residential areas that surround Jesmond Dene Road. However this is only ever be piecemeal without a clear movement plan for these areas. This proposed measures in this scheme are pointless and will do little if anything to improve condition in these neighbourhoods. We agree that rat running must be tackled and advise, again, that a movement plan – clearly showing circulation for driving, cycling and walking – is much needed.

However, turning or entry restrictions will encourage new behaviours or rat-runs and the scheme should be designed to mitigate the effects of any dangerous behaviour or illegal movements. As this is a signalised junction, it should be safer to provide for right turns here than have people perform other more dangerous turns to reach their destination.

Nevertheless, rat running in Jesmond must be tackled. The High West Jesmond – South Gosforth has problems with rat running too.

Inadequate facilities for cycling and walking

The proposals do not show any separated cycling infrastructure.  As Jesmond Dene Road forms a key route for cycling (and potentially part of a Strategic Cycle Route), it is essential that space is provided for safe and convenient cycling, separated from motor traffic and pedestrians.

There is no indication of any improvement for cycling along this entire section of the scheme and pedestrian improvements are limited to a single crossing across Osborne Road. There is plenty of space available, it has just been unfairly provisioned for the movement of motor vehicles. This demonstrates a indifference from the council to consider the livability and viability of the area, by allowing for higher levels of motor traffic to travel through it.

Throughout the entire area there is only one point where pedestrians and cyclists can cross, with a huge distance between the next signalised crossing in each direction. This is already a very busy road. At this one location cyclists and pedestrians are forced into conflict through walk/cycle shared-use design. As mentioned before, for walking and cycling convenience the council need to ensure that cycle and pedestrian movements are clearly demarcated. Cycle and walk linkage across the Northern Access Corridor is not sufficient, and the provision for walking and cycling along the Northern Access Corridor has been totally neglected.

In order to remove rat-running traffic through Jesmond council need to take a more holistic view of the area. We propose that within Jesmond the area is split into four sections that can each be accessed from the four separate signalised junction that provide entry and exit from Jesmond, but that private motor traffic is zoned, ie prevented from travelling between these sections. This can be done through use of mode-filtering techniques. This would make rat running impossible, making huge improvements to the liveability of the area while still providing motor vehicle access to all of Jesmond. It would also help encourage a mode shift towards walking, cycling and public transport as short journeys become more direct and quicker than private motor journeys.

An example of how this could be achieved (red diamonds being the signalised junctions providing entry into the separate sections): 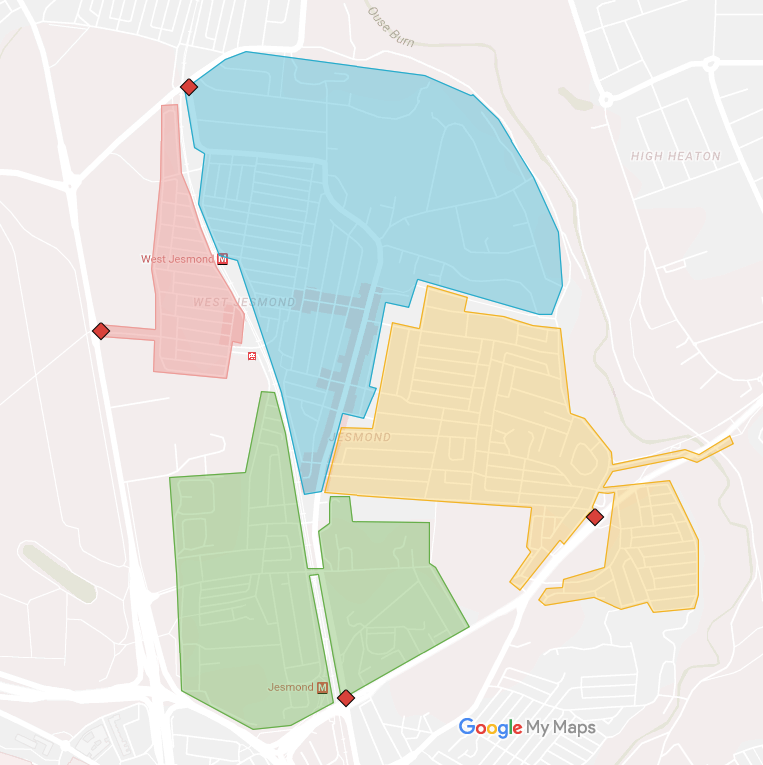 Looking at Ilford Road, the changes proposed will not reduce rat running in the High West Jesmond area. Shamefully, nothing has been proposed to improve conditions here, yet any significant road change plans provides the opportunity to do so. Ilford Road, as many other roads in Newcastle, suffers from speeding despite its 20mph designation. It also is a vital cycle link into Jesmond and the city centre. The southern section of Ilford Road could be restricted (such as making the southern section one way) to help reduce rat running yet nothing has been proposed to do this.

The removal of right turn from Jesmond Dene Road on to Ilford Road seems more appropriate here than at Osborne Road, but nothing is shown in the drawing that would physically prevent drivers doing this. The bridge over the metro track on Moorfield is shown as being reduced to one-way. We, however, see no reason why the bridge cannot be filtered in both direction for motor traffic, to prevent rat running in both directions. This would make roads safer to use and more pleasant to live on too. In order to remove rat-running traffic through Ilford Road, High West Jesmond and South Gosforth similar measures to those we have proposed for Jesmond need to be put in place here too.

We give an example of how this could be achieved below. Green circles indicate the few places mode filtering could be put in place to achieve a removal of all rat running in the area, if combined with our suggestion of a one-way system for motor traffic at the southern end of Ilford Road: 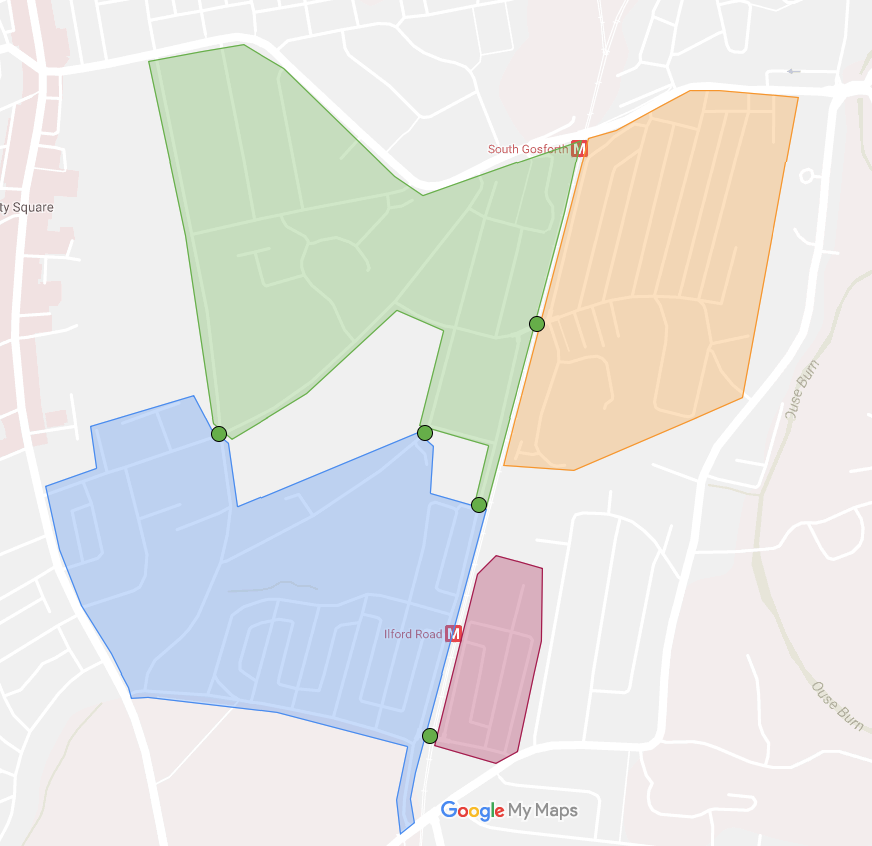 With the proposed removal of right turns onto Osborne Road, the council have designed merging lanes that stretch all the way from the proposed Blue House roundabout all the way to the Moorfield junction. This will force merging to happen in the area where more pedestrians can be expected as this is a residential area. Merging lanes create conflict and complexity and can lead to drivers behaving impatiently jostling for a better position in the traffic. If the council wish to provide more than one lane leaving the Blue House roundabout junction, they should merge the lanes well before the Ilford Road junction, away from where higher levels of local people expected to be walking and cycling and where the danger posed to other road users from poor design and behaviour is lower. Ideally there should be no merging and only single lane exits from the junction for what is eventually a single lane of road.