On Tuesday 26 August the Management Committee endorsed Sally Watson as Jesmond branch chair. The Committee is absolutely delighted to see the campaign grow and Sally take up this pivotal post. On the Committee’s behalf, Katja says “We warmly welcome Sally to our campaign team. Sally will expertly lead the Jesmond branch and take action and make things happen locally. I know Sally to be inclusive, professional, communicative, very approachable and she can be firm too when needed. Sally will be a fantastic branch chair. It’s great to see the campaign grow, branch out and get active, locally.”

I grew up in Newcastle and after 17 years away living in Edinburgh and London I returned 4 years ago. My husband and I live in Jesmond with our two children, aged 3 and 6. Before having children I was a museum curator and currently (when not campaigning for better cycle infrastructure!) I am busy looking after my daughter and an allotment.

2. What got you into (transport) cycling?

I spent many happy days cycling round High Heaton as a child but like many children, stopped cycling when I was a teenager. A combination of Dutch friend and financial necessity in London inspired me to start again and I swapped from tube to bike for my commute at the age of 27. A baptism of fire if ever there was one. I couldn’t afford a car so the bike gradually got used for more and more trips. Panniers were added for shopping. Holidays were undertaken on it. A trailer was added when the children came along. And our most recent purchase is a tandem that I can transport the oldest to school on while the little one sits on a seat at the back. We also have a cargo trailer for camping trips and trips to the garden centre.

3. Why is campaigning on the issues of cycling important to you?

I have done a lot of cycling but am still a very nervous cyclist. I can relate very well to those just starting out and can see what stops many people from even trying to ride their bike in the city. I can also see how frustrating it is for many people who cycle with children and would love to see it become an easy option for parents to cycle to school, parks and friends houses with their kids. I have a lot of friends who would like to do this but think that currently it is just too dangerous. A visit to friends in the Netherlands a few years ago opened my eyes to how it could be – they had cycle paths right outside their front door!

Jesmond is a lovely place to live in many ways, but our streets are not people-friendly. It would be nice to see some of our roads re-designed with more thought put into how they could be improved for cyclists and pedestrians. Cycle lanes, improved crossings and a reduced speed limit on Osborne Road are a priority. It would be great if we could close down some of the rat-runs (like Highbury and Haldane Bridge) and install cycle lanes on Tankerville Terrace and Forsyth Road to help commuters and children travelling to school. There are also a lot of problems with the Jesmond Road and Sandyford Road and the streets leading off these main roads, where many cyclists resort to using the pavement because of safety concerns.

Ultimately, as much as I love my tandem, I feel really sad that my son doesn’t get to ride his own bike more. He is more than capable. But our city prioritises cars and road layouts favour driving as a mode for even just short trips, so it is often not safe for him to do so.

Photo 1 – Sally and her family 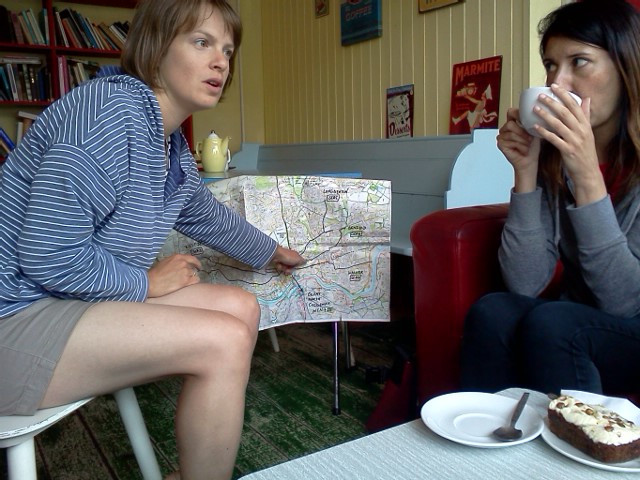