As active stakeholders and participants in the Cycle City Ambition Fund (CCAF) bid we wish to correct the North Jesmond’s Liberal Democrats statement on Acorn Road plans. Their political outlet, the Focus newsletter, broke the cross-party support and trust that council plans should have enjoyed. It was also factually incorrect and scaremongering.

The essential points of the CCAF are that its designs and plans benefit pedestrians and cyclists and act as a catalyst for future human scale developments and improvements for everyone in the area by creating better street environments. Cities in the UK and Europe which have introduced such schemes are years ahead of us in Newcastle – we have to get together and work constructively on how to bring this about. The funds have to be spent within a limited timescale and on projects which meet the criteria, otherwise they will be lost to other areas of the city. A Project Board will take final decisions, as necessary, on design and process. Sustrans were subsequently employed to engage and consult the community and draw up plans in accordance. We supported the design put together. Despite its lowered ambition, we recognised that compromises had to be made to move forward as well as satisfy CCAF.

The CAAF plan, a one-way layout, will lead to less through (non-stopping) traffic and hence improve noise levels and air quality – a very serious problem in areas of high car usage particularly when there is much idling, starting and stopping by drivers trying to find a parking spot, for example. We believe that the impact of the one-way system on neighbouring streets will only be slight. Two-way cycling on a one-way street is already the norm elsewhere. Only two car parking spaces will be lost and it is likely that fewer spaces will be required, owing to more people walking and cycling (which is the intention of the scheme). The wider pavement will make movement around the area much pleasanter for walkers and will encourage a social focus not anti-social behaviour. The plan is supported by the majority of businesses on Acorn Road who find the current congestion very unpleasant, and their concerns about parking have been adequately addressed.

Katja Leyendecker, chair of Newcycling, says “We particularly reject the view that we and the Green Party opposed choice (see photo below) when in fact we sought and supported choice, engagement and involvement of residents, Acorn Road users, retailers and interested groups all along, right from the start. If the Jesmond Liberal Democrats didn’t like the plans or the process they should have said so much earlier. There was plenty of time to do that, influence and shape, they knew what was happening and when. Their vision for the future in the light of urban trends is blurred and really not up to scratch.” 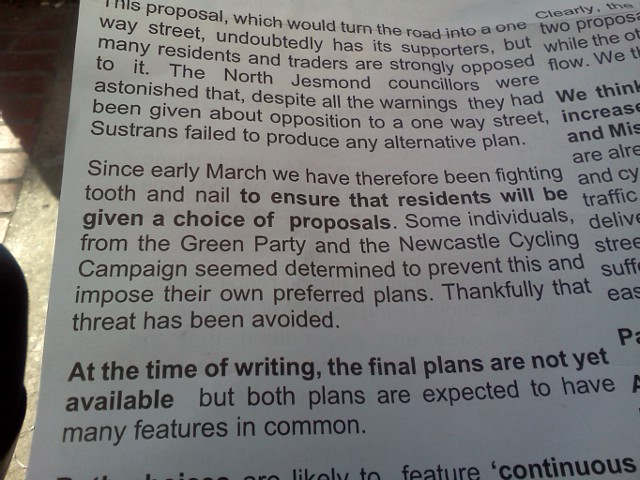