We talked about the core principle functionality here. Whilst the functionality principle, SWOV says, aims for roads to have one exclusive function and distinguishes between traffic function (flow) and access function (residence), the homogeneity principle aims at keeping differences in mass, speed and direction of vehicles using the same traffic space being as small as possible. Functionality and homogeneity are at the basis of the categorisation of roads into national roads, district and local access roads and the engineering and planning response to it.

In a crash, the factor of physical vulnerability comes into play. Injury is the result of a combination of released kinetic energy (mass times speed), biomechanical properties of the human body, and the physical protection that the vehicle offers its occupants. The homogeneity principle entails the following:

All these aspects of road safety are closely linked to the principles of protection [pdf]. The traffic speed and volume matrix acknowledges that in inhomogeneous environments with high speed differential and/or bigger motor traffic volumes, separation is vital to protect cyclists and keep them safe; and homogeneous environments can see driving and cycling mingle.

For roads where there is possible conflicts between cars and unprotected users, Advancing Sustainable Safety (pdf, page 14) recommends a safe speed of 30kph (18.6 mph). Where traffic levels are sufficiently low, cyclists can share the space with motorised traffic. The streets should be designed in a way which keeps the traffic speed low. The example below shows a street that is covered in brick instead of asphalt and the limited and constant width – both of which help keep speeds low. 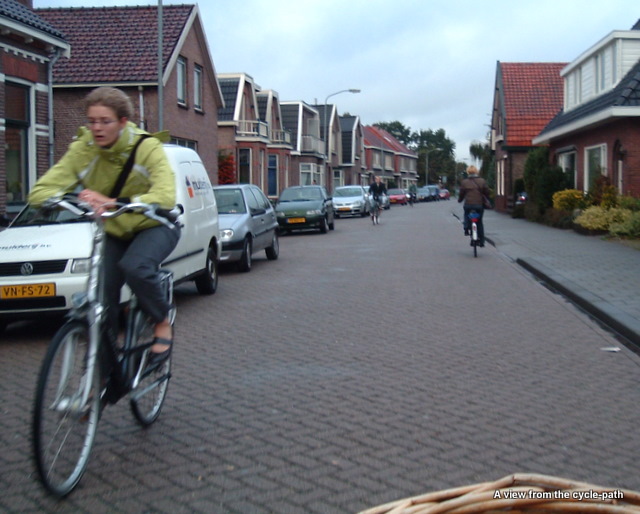 Where a cycle route runs along a local access road, it is beneficial to make it more obvious in the design that the carriageway is for bikes. An example of this is a ‘cycle street’. Car speeds are kept low by making the central section of carriageway an area where it is expected to find bikes (using the red asphalt). When driver wants to pass, they will have to get on the brick-covered edges of the road which are slightly uncomfortable to drive on. Additionally, as this street also provides a movement function for many cyclists, car parking has been marked out as separate area, so that no moving traffic would be expected to weave in and out of parked vehicles. 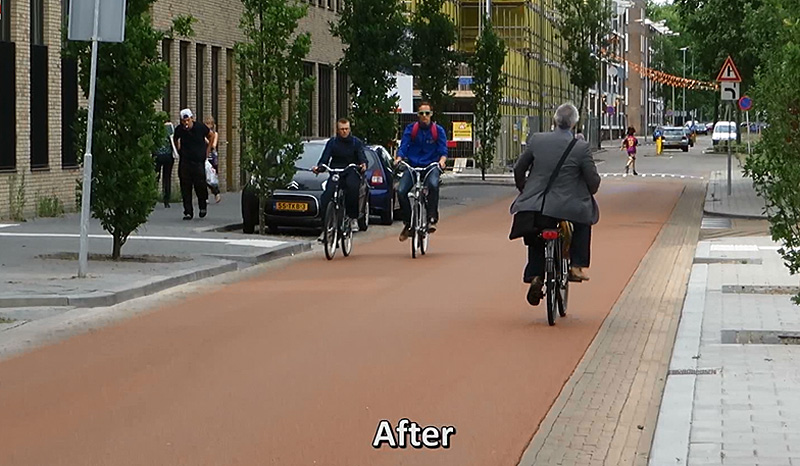 Some local access roads will carry more volume of traffic than others depending on their position within the network and the strength / connectivity of the network. On these busier local access roads, it would be more appropriate to provide some separation using painted cycle lanes, and make sure that car parking will not interrupt any cycle movements. 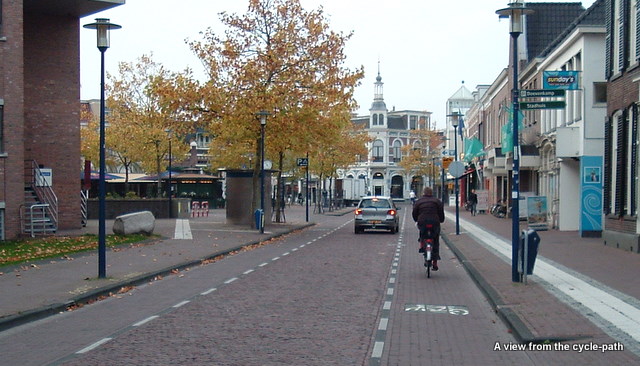 On even busier local access roads, it is sometimes more appropriate to fully separate pedestrians and cyclists from the motor traffic like you would on district access roads or re-assess the road classification and change the network to reflect its function.

As the network transitions from local access roads to faster (over 20mph) and higher volume district access roads, unprotected road users need more separation from the motor traffic. As speed increases, the amount of separation must also increase. The photo below shows how separate cycle and pedestrian paths have been designed with significant protection from the carriageway. 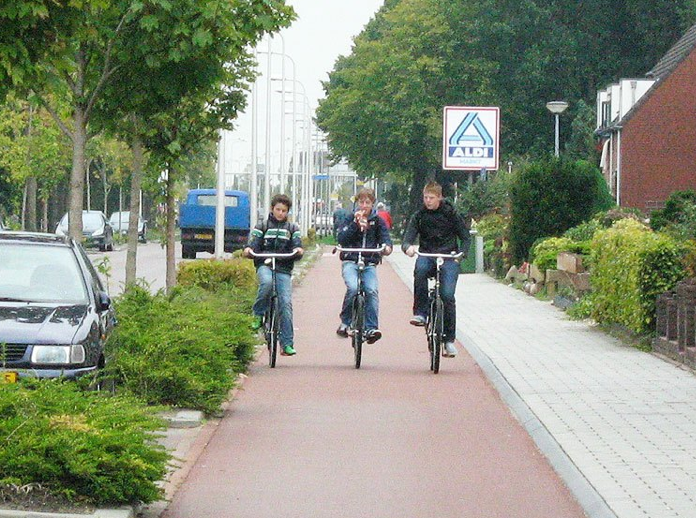 Where pedestrians and cyclists cross district access roads, the SWOV in Advancing Sustainable Safety (p. 92) says that crossings should consist of a bridge or subway (grade separation) to avoid conflict. This is due to the greater potential for serious injuries to pedestrians and cyclists from impacts with vehicles travelling at 30mph and above, especially at crossings ie locations where conflicting movements meet. Well designed subways and tunnels are generally more favourable than bridges to cyclists, as they require much less effort to use. 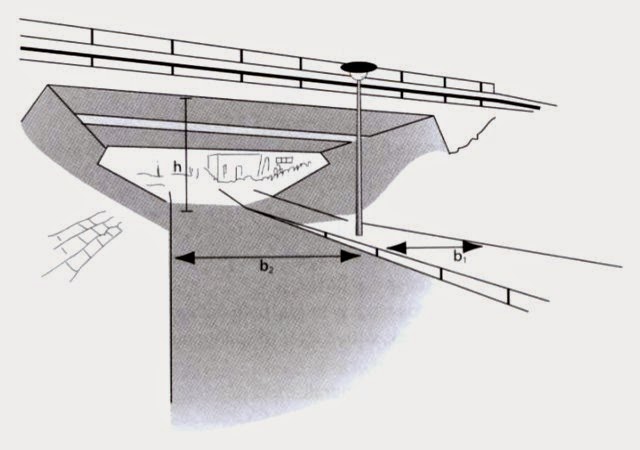 The image below shows the drawing used in the CROW: Design Manual for Bicycle Traffic page 285

On faster and higher volume district access roads, separate routes should be provided similar to what would be expected on national roads.

On national roads, the speeds and volumes of motor traffic are so high that a completely separate route and safe grade-separated crossings must be provided for cyclists.