No doubt you remember Space for Cycling and our Big Toon Ride, so after all that… we thought we better give you a quick update. We previously reported via a press release that we did fantastically well nationally – Newcastle showing the highest support rate outside London. But how does it look locally, on ward level?

We have crunched the numbers for you and here’s a quick visualisation too.

At the time of writing (last updated 8 August 2014), we have 40 Councillors in support for Space for Cycling. This is 51% of all Newcastle Councillors. The support rate between Labour and Liberal Democrats (the two main parties) is very similar, demonstrating once more that transport is a non-partisan subject. We are keen to foster cross-party support where-ever we can… agendas and policies are still easily hijacked and exploited for party point scoring.

So it is good and hopeful to note that Labour – as the main party running the council – has many senior Councillors supporting Space for Cycling’s six asks.

In addition to checking out the below map, you can also download a spreadsheet (attached below) showing exactly which Councillors have signed up (or not, as it may be). If your ward is not yet in full support, you can still write to your Councillors, and ask for their support. If you are a Councillor, please get in touch with us newcastle.cycling.campaign@gmail.com or simply register your support online http://space4cycling.org.uk/councillors

Looking at the map it is interesting to note that support radiates out from the central core with Westgate (city centre), Ouseburn and South Jesmond fully supportive. The East end however remains barren of enthusiasm to provide for cycling; the map clearly highlights that to us. This is particularly strange, as after the mysteriously shelved Welbeck Road project Councillors in Byker, Walker and Walkergate were quick to re-assure us they weren’t anti-cycling but rather only against that route choice. Discussions however about an alternative route have stalled. So we are left to wonder about what’s going on in the East end. We’ll cycle the route as part of our infrastructure safaris in September. Maybe the Councillors will care to come along. 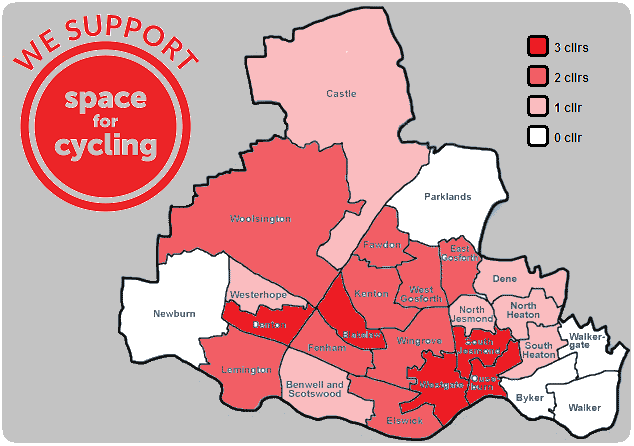